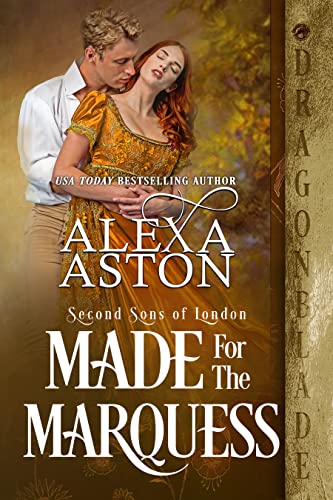 Made for the Marquessby Alexa Aston

Available through July 03 at

First sons inherit all. Third sons are promised to the church. Second sons do their duty and serve in the military—unless fate intervenes and turns their lives upside down.

Welcome to Second Sons of London, a new Regency Historical Romance series by bestselling author Alexa Aston, where seven men who are second sons lay claim to fabulous wealth and lofty titles and fulfill their destinies when they find their soulmates.

A reticent army officer who loses a beloved brother. A personable beauty eager to make up for lost time. And one magical kiss that changes everything . . .

Lieutenant-Colonel Percival Perry maybe be reserved, but he is an outstanding army officer. When Percy receives news of his brother’s accidental drowning, he is forced to sell his commission and take up his title as Marquess of Kingston. Nightmares of the war plague Percy even as he longs for a wife and family. When he meets an attractive, spirited woman, he can barely speak and knows he made a poor impression upon her.

Araminta Nicholls is two and twenty and missed making her come-out, thanks to the pesky Americans who started a war that kept her stuck in Canada for several years. Minta is ready to make up for lost time and find a husband so she can have the children she longs for. When she is introduced to a solemn marquess, Minta believes him to be much like her own shy twin and comes to have feelings for Lord Kingston.

But Percy’s nightmares continue and he fears he might plunge into madness, taking Minta with him. Knowing he loves her, he makes the decision to give her up, believing he is damaged goods. But Minta is a fighter—and she isn’t going anywhere.

Can Minta convince Percy that opposites can make for a wonderful marriage—and that love can conquer any problem if they face it together?

Find the answer in bestselling author Alexa Aston’s Made for the Marquess, the fourth book in Second Sons of London.

Each book in Second Sons of London is a standalone story that can be enjoyed out of order. 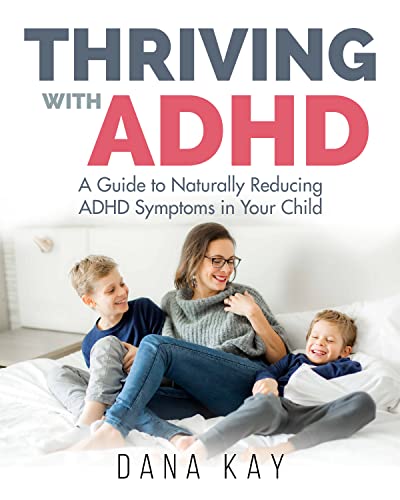 Thriving with ADHD: A Guide to Naturally Reducing ADHD Symptoms in Your Child by Dana Kay

No more guessing which strategies or remedies “might” help support kids with attention deficit hyperactivity disorder. No more hoping that something “might” improve ADHD behaviors and then being disappointed when it doesn’t. Thriving with ADHD uses strategies that work!

For all caregivers who are on a mission to support kids with ADHD using food and other natural methods, Thriving with ADHD provides the blueprint to jumpstart the journey. She’s through with love.

Lady Laurel Devereaux prided herself on her sterling reputation, even as she overlooked her two younger sisters’ foibles and their ailing grandfather’s little peccadilloes. She always adored frolicking in fountains and dancing before breakfast. But those were innocent delights compared to the one night she left a ballroom to play the piano alone—and a charming man joined her to play a duet that became a mad love affair.

He quickly proposed and just as quickly jilted her. Now she’ll marry only for friendship or security or children.

He’ll never give her up again.

Now Hadley, Viscount Grey, arrives in Brighton and vows to win Laurel back. But this time, his greatest problem is not overcoming his competition or challenging Laurel’s vow to remain a proper lady, but her decision to never love another man.

How can he convince her that she simply never stopped loving him?