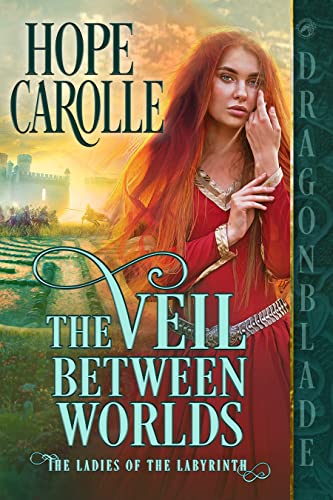 The Veil Between Worlds by Hope Carolle

A time-travel adventure she never wanted… with the man who broke her heart.

When Ellie Hartford, a divorced mother of two and professor of Middle English, goes on vacation with her two little girls to England, she thinks it’ll be a relaxing time to catch up with her friend Jane. They’ll go on long walks in the beautiful English countryside, eat delicious food, see a few sights, and catch up with her best friend, who—bonus—lives in a partially renovated castle. They are stunned when John, an ex-boyfriend of Ellie, shows up drunk, hand-cuffed in ancient manacles late one night. Handsome and kind neighbor Harry helps get John uncuffed, but the mystery remains—what happened to John? A medieval treasure trove is revealed, that has a direct connection to the haunted labyrinth in Jane’s back garden. When the force of broken hearts wields more influence than Ellie could have foretold, she is pulled back to the year 1344, to the reign of Edward III, and the founding of the Order of the Garter.

Ellie will do whatever it takes to get back to her children. With her knowledge of the medieval language and culture, she must navigate the intricate world of feudal England, with its tournaments, knights, chivalry, dancing, and feasts.

Not to mention the distraction of two men eager to tear down the walls she’s built around her heart.